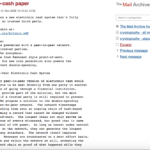 Public description: An archived version of the original email sent to the Cryptography Mailing List by Satoshi Nakamoto the originator/s of Bitcoin. This object was suggested as an object worthy for inclusion by a web developer known to the staff of the museum and there was some discussion about whether the developer should also be included as an 'object'. Joel suggested we source the original email and responses. Haidy wasn't entirely sure what the object is, ie does it have meaning outside of the narrative of Bitcoin? Julie felt the archived version is what most people can access and have seen and therefore is the most meaningful version.

Credit: Mail Archive should be credited with storing and displaying this message.The image of the original post is held here: https://www.mail-archive.com/cryptography@metzdowd.com/msg09959.html However the authorship of the original message and to whom it 'belongs' is not at all straight forward. The identity of Satoshi is unknown and could be multiple persons, there is a great deal of speculation on-line about 'his' identity which adds to the value of this object. Were the identity known it would perhaps be more of a footnote in internet/money/block chain/bitcoin history but as it isn't it creates an air of mystery in line with the popular imaginary of hacker culture and internet 'geeks', characterised by anonymity and secrecy. Additionally the forum on which it was posted could also be considered an 'owner' of the message. In line with many social media sites, the ownership of the content is one that is contested and as such is distinct from a private letter sent on paper or physical note pinned to a board for example.

Size: the original post and the digital image of the post require little space and little energy in order to exist, unlike Bitcoin itself. I would say it is small.