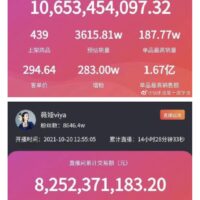 Public description: Object: Screenshot of turnover of two live promotion show Objects behind: The hosts' team to make the live streaming show, the brands who provide the products, the whole supply chain and delivery system, millions of customers/viewers online, the platform of Ali Group Actions involved: Selling products, buying products, operating the platform and live streaming performance, Date of happening: Oct 20, 2021 Description: This picture, found in the news feeds of Stockbroker of China, shows that China's two top hosts of live streaming e-commerce sold 2 billion pounds of product within 12 hours on the first day of a specific Single's Day promotion. The combined turnover of the two live broadcasters in one day is close to 19 billion yuan (more than 2 billion pounds). It is interesting to notice that among 4500 listed companies of stock markets of Shanghai and Shenzhen, only 387 of them have exceeded this figure in their whole year's annual revenue in 2020, as Stockbroker of China said. Background: The concept of live streaming e-commerce is to promote and sell goods through influencers streaming on their own social media channels, most often through China's online shopping malls. This is similar to Home Shopping Network, but with charismatic, trendy anchors. In addition to being an infomercial, it is also a variety show.

Credit: It was posted by Stockbroker of China, a news agency. The watermark is constantly changing on this picture on social media. This picture is widely spread online and reported by news agencies. Since it's a screenshot of the two hosts' achievements approved by the hosts themselves, the originality of the picture is not the topic of discussion.

Size: This object directly consists of time, space, goods-money circulation and human relationships. The screenshot is chosen to be the object on display because it was taken right after the 12.5-hour live streaming and it shows the ultimate turnover of the two hosts. It's a good conclusion of this event. To specify the materiality of the object, the main body of it should be the supply chains of products and this live promotion show.