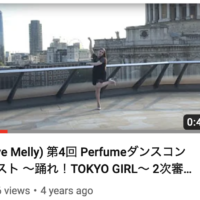 Public description: (see external link for the full video as the file size is too big) This object is a YouTube video dance competition entry to the final round of a dance contest held in Tokyo, Japan, by a group called Perfume. The video exists as part of a wider ecosystem of international fans of the group who make cover dances of the groups choreography, thereby helping each other to learn from each other by watching. The video also manages to internationally signal and translate my dedication as a fan to the girl pop trio, thereby allowing me to eventually participate in the Japanese art scene through travelling to the final round in Tokyo and connecting with famous Japanese artists, as well as local fans in London. This could potentially reflect how "Boas’ life groups were active demonstrations of how an embodied experience of objects is literally built into museum object lessons." (Geismar 2022, p.13). The international fans' learning of choreographies by the Japanese pop groups' longtime choreographer, Mikiko (the creative team more generally has remained more or less the same for the past 10 years) allows them to literally incorporate an embodied understanding of the Japanese context within which the group is situated. For example, the dances are always performed wearing heels, perhaps reflecting the demanding visual and physical expectations of Japanese women to wear heels in the workplace, something which has even been legally enshrined through government policy. Further, Perfume is famous and known for, in some ways, strongly emphasising uniformity through outstanding dance synchronisation and attention to detail (in performance and in the choreographic choices themselves), a value which can more broadly be observed in for example obento practices by Japanese mothers (see Allison 1991). Finally the group members are also aesthetically easily recognisable for their signature hairstyles and dress codes, which have more or less been consistent since their debut in 2000. Nocchi is the one with the bob and typically more tomboyish style, A-chan is the one with the ponytail and hime (princess) / girly fashion, while Kashiyuka is the one with the long hair and 'cool', more sexy outfits. With this context in mind, international fans tend to chose their favourite member to learn the dance for, which thereby influences the style in which they dance. This was reflected in dance competition's instructions, which asked participants to embody 'the feeling' of their respective choice of dancer. Japanese fans in particular, tend to interpret this as a call to replicate their favourite member through fashion and by getting the same haircut. In my case, I was not as attuned or dedicated to stylistic choice by for example choosing to not cut my hair to match Nocchi's famous bob style. I was penalised for this when it came to the final round, as my more individualistic style preferences likely reflected my lack of dedication to group cohesion, for having chosen her by singling her out as the best dancer of the trio.

Materials used: My laptop to edit the video, a phone to record it, my ex-boyfriend, St. Paul's cathedral to signify my London presence (a globally connected city and creative hub), code, my clothes, Photo Booth to record and rewatch the dance (to check for errors and adjust my moves to perfectly match the choreography I was copying)

Credit: The choreography was written by a famous commercial Japanese choreographer, Mikiko, who also choreographed the Japanese Opening and Closing Olympic ceremonies. The music is written by Yasutaka Nakata, the longtime producer of the girl group, who is their sole musical collaborator. He writes the songs, musically arranges them, writes lyrics for them, produces, mixes and masters them and also records the vocals with Perfume at his home recording studio in Shibuya. He also the sole musical collaborator for arguably the most famous Japanese pop star, a major tool of soft power through her promotion of Harajuku fashion, Kyary Pamyu Pamyu. Yasutaka-san is often referred to as 'kami-sama' by fans and the girls themselves as he is arguably the root of their success. He is even famous overseas and is a known influence for many Western electro-pop artists, such as Madeon and Steve Aoki.

Size: Dimensions: 738x616 387 KB The object is relatively small compared to some of the other files on my computer. It's strange that numbers are used to assess the size and the competition entry this image represents was actually very emotionally and experientially meaningful for the uploader. In that sense the size of this video is unlimited as it could result in further connections to people whose effects on me are immesurable.