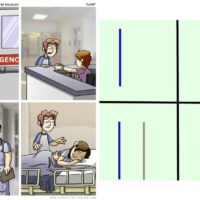 Public description: The loss meme originated as a panel written and drawn by Tim Buckley in 2008 for his gaming webcomic Ctrl+Alt+Del depicting the miscarriage of of the main character Ethan's wife Lilah, but soon became a meme in which the abstract structure of the positions of the characters in the original panel were reproduced in various forms. The panel was criticized among the internet webcomic community within the context of the original comic, and this criticism prompted many of the original sarcastic reproductions. "Is this loss?" refers to the reproduction of the panel as a meme in various other formats (i.e. with various other objects representing the characters in the positions they occupied in the panel), with the meme's comedic force coming from the delayed 'gotcha' recognition of the meme as a reproduction of the panel. Reproductions of the panel grew increasingly abstract as the memes circulated throughout the internet. The image above shows both the original panel and an abstract reproduction of the panel as a meme, and is the first DuckDuckGo result when searching 'is this loss.'

Credit: Credit for the original panel goes to Tim Buckley, creator of the Ctrl+Alt+Del webcomic. Credit for the repurposing of the panel as a meme, as for most memes, is unknown.

Size: Memes are reproducible images and have no set size, but are digital images of generally small resolution (under 1024 x 1024 pixels, e.g.)