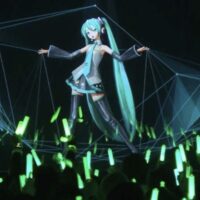 Public description: Hatsune Miku is a virtual character created by Crypton Future Media. Originally, she was sold as the face of computer software that allowed users to generate their own music, with her as a vessel. However, using the holography technology, she is put on the stage to perform a concert every year. In the concert, Miku is accompanied by four human musicians who are indefatigable, playing for two breakneck hours with a singer who has no need to pause for water breaks, costume changes or banter.

Credit: The original developer is a Japanese company called Crypton Future Media. All the songs she performed in the concerts were produced by the users of the vocaloid software and some of her fashion styling were designed also by the users( fans in another words). Miku fans enrich her contents, characterize her and idolize her.

Size: When having the conceret, she was the same size as a real human girl. According to the official character set, she is 5 ft 2 in tall.