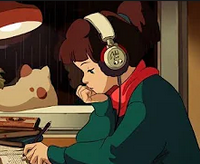 Public description: This data object is the animated loop eponymously known as Lofi Girl, represented here by a still image pulled from the artist’s portfolio site. Lofi Girl is a 2D animation of a girl sitting studying at a desk that plays in the background of the YouTube livestream radio station lofi hip hop radio - beats to relax/study to. The station consists of a 24/7 broadcast featuring mellow instrumental music accompanied by a video loop of Lofi Girl diligently studying away, providing a visual compliment to the passive and unobtrusive background nature of the audio stream. The livestream is curated and maintained by YouTube user ChilledCow, who first started broadcasting lofi hip hop radio - beats to relax/study to in February 2017 and is known for being an early pioneer in establishing the standards of canonicity for 24/7 background music livestreams as a distinct YouTube genre.

Credit: Lofi Girl was designed and animated by 2D illustrator Juan Pablo Machado specifically for YouTube user F.K.A. ChilledCow to use as an intentionally copyright free background animation in the lofi hip hop radio - beats to relax/study to livestream video. She is modelled after a character from the movie Whispers of the Heart, made by the Japanese animation studio Studio Ghibli in 1995. When lofi hip hop radio - beats to relax/study to first began broadcasting on YouTube in February 2017 the background animation was a GIF from Whispers of the Heart. The GIF in question depicts a side-profile view of the movie’s main character, Shizuku Tsukishima, sitting at a desk wearing headphones while writing in a notebook. In July 2017 lofi hip hop radio - beats to relax/study to was subject to a YouTube copyright claim over its unauthorized use of the Studio Ghibli animation and was subsequently pulled from the platform. Following the take down, channel owner ChilledCow/Dmitri sent out a call for proposals for illustrators who could replicate the Studio Ghibli animation style for a new, original animation of a girl studying, tailor-made for the channel so it could relaunch on YouTube without risking another copyright claim take down. In March 2018 the station relaunched its livestream with Machado’s unique Lofi Girl character replacing the copyrighted Studio Ghibli version initially used for the station’s original 02/17 – 07/17 livestream. Because Machado’s Lofi Girl was created according to specific instructions to mimic the particular animation style and aesthetics of the Studio Ghibli character initially used as the background animation for the lofi hip hop radio - beats to relax/study livestream, some of the credit for Lofi Girl may also be attributed to the animators behind Whispers of the Heart; character designer Kitaro Kosaka and director Yoshifumi Kondō. . Like other data objects that have gone through a ‘memeification’ process, Lofi Girl circulates freely and unrestricted and has been re/distributed and reused, remixed and reinterpreted many times over by fans across the world. As the face and mascot of the channel, Lofi Girl has also come to be associated with the brand so much so that after 6 years of running under the name ChilledCow channel founder Dmitri tweeted a series of messages in March 2021 announcing the YouTube channel-cum-label has been renamed as simply Lofi Girl, addressing the impression of community and collective involvement surrounding the station in the announcement. So, while Lofi Girl the data object could technically be said to belong to the Lofi Girl the ‘brand’, the gesture to the community surrounding Lofi Girl speaks to the multiplicity of ways in which the ownership of data objects is also articulated through affective dimensions and is collectively conceived and globally dispersed. In a way then, there is a feeling that Lofi Girl also belongs to everyone who sees themselves in her and thus in a sense also belongs to all of us. Or at very least, to those of us who have sought solace in Lofi Girl’s dependable companionship and studious nature, projecting onto her a sense of solidarity through all-nighters spent writing along with Lofi Girl and maybe feeling a little less alone in the process. The complexity of attributing credit when it comes to Lofi Girl speaks to wider questions surrounding notions of creativity and authenticity as they pertain to data objects, and the ways in which data objects may challenge traditional conceptualizations of ownership and authorship.

Size: The first appearance of Lofi Girl came in the form of a 3840x2160 resolution picture attached to a blog entry posted 02/02/2018 on the illustrator’s portfolio site. The default video player size for YouTube videos is 320x240 pixels, played in standard definition 480p. The YouTube video player box on my computer screen is 9x16 cm, and so in this sense the data object of Lofi Girl may be considered small. Thinking about conceptualizing size on a scale of time, Lofi Girl seems much bigger. The animation is 80 seconds long and plays on a continuous 24/7 loop. This loop is also fixed as a 13,165-hour long video as a result of YouTube terminating and then reinstating ChilledCow’s channel, ending a 548-day livestream and causing it to be saved as an uploaded video instead. In this sense, the length of Lofi Girl is simultaneously 80 seconds, 13,165 hours, and also perpetually increasing: as long as the livestream continues to broadcast, Lofi Girl will keep growing along with it. As I am writing this (4/05/21) Lofi Girl’s current live stream has been broadcasting for 9792 hours (408 days) and counting.