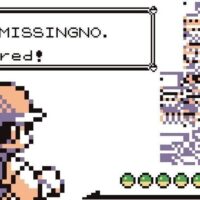 Public description: 'MissingNo' is the "Glitch" Pokemon (Bird-type) found in the 1996 game "Pokemon Red" and "Pokemon Blue". Little is known about MissingNo's origins, or whether it existed as a test, or as an error in the game. MissingNo.'s Red and Blue normal form is a dual-type Bird/Normal glitch Pokémon. It has a sprite that is a strange block of glitched pixels in a backward-L shape. MissingNo.'s cry is generally the game's equivalent of a "blank" cry: a Nidoran♂ (base 00)'s cry with a pitch of 0 and no echo. This is because the cries of these Pokémon are undefined in the data structure. Although the original MissingNo is an undefined Pokemon, it can be taught various attacks and techniques associated with bird-type and water-type Pokemon. MissingNo developed a cult status among players and fans of Pokemon. In Emulator versions of Red and Blue, MissingNo was given active player features, including evolution tags and a lineage. Nintendo, the creators of the Pokemon video games, have included MissingNo as a special character in its most recent games in the official Franchise.