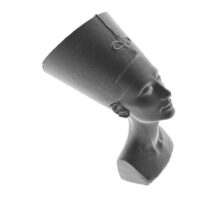 Public description: Al-Badri and Nelles scanned the head of Nefertiti clandestinely in the Neues Museum Berlin without permission of the Museum and they hereby announce the release of the 3D data of Nefertitis head under a Creative Commons Licence. The artists 3D-Print exhibited in Cairo is the most precise scan ever made public of the original head of Nefertiti. With regard to the notion of belonging and possession of objects of other cultures, the artists intention is to make cultural objects publicly accessible. The Neues Museum in Berlin until today does not allow any access to the head of Nefertiti nor to the data from their scan. “With the data leak as a part of this counter narrative we want to activate the artefact, to inspire a critical re-assessment of today’s conditions and to overcome the colonial notion of possession in Germany” the two artists say. (source: http://nefertitihack.alloversky.com). The object uploaded here is the .obj file which was made downloadable from the artist's website or as a torrent file. This data file allows the user to print their own version of the bust of Nefertiti or play with the data.

Credit: A very high resolution Digital Scan of the bust of Nefertiti in the Neue Museum, Berlin presented as though it was hacked from the Museum using handheld Kinect scanners, made freely downloadable to the world by the artists Nora Al Badri and Nikolai Nelles. The Neue Museum claim that they own the digital rights to reproduce Nefertiti's bust. The Government of Egypt has an ongoing repatriation claim arguing that the Neue Museum is not the rightful owner of the bust, or of its data. Whilst the data has been released as a direct protest to the proprietary claims of the Neue Museum, that act has been transformed into an "artwork" credited, or authored, by Al Badri and Nelles. Technology specialists have raised doubts as to where the data in fact came from, and the artists have claimed that they have had technical assistance but the technical support and skill to produce the data has never been attributed to a named individual.

Copyright: This object has been released in a completely open an unlicensed way. It has been uploaded to a website to download for free, without even using a creative commons license. Technically, Al Badri and Nelles could claim copyright over this as a work of art hosted by their personal website. The ownership of the data is contested, mirroring contestations over the ownership of the original artefact.