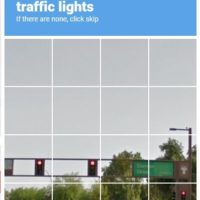 Public description: reCAPTCHA is a Google-owned security system that generates tests humans can pass but current computer programs cannot, enabling web hosts to distinguish between human and spambot website access. Google has taken advantage of this human interpretation service by using the generated data to train AI. reCAPTCHA has been criticized for being a source of unpaid work which Google profits from for its AI research, raising questions about participant consent.

Credit: The term “CAPTCHA” was coined in 2003 by Luis von Ahn, Manuel Blum, Nicholas J. Hopper, and John Langford. This team of people claims to be the first to invent the CAPTCHAs used widely today, which they first described in a 2003 publication. Another team with Mark Lilibridge, Martin Abadi, Krishna Bharat, and Andrei Broder also claims to be the first computer scientists to invent CAPTCHAs, which they used in 1997 at AltaVista to prevent bots from adding URLs to their web search engine. Luis von Ahn created the reCAPTCHA system in 2007, which Google purchased in 2009.