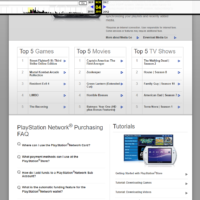 Public description: The Sony PlayStation (PS) Store is an online platform for purchasing digital video games, movies, and TV shows. It is accessible on browsers and a variety of PlayStation consoles. The store sells games and downloadable content (DLC) playable on a several of Sony consoles, the PS Portable (PSP), PS3, PS Vita, PS4, and PS5. The store is accessible in a few regions. Regional stores adhere to local laws, taxes, and restrictions on content. According to Sony, in April 2011, Sony’s gaming online service PS Network was hacked by “Anonymous,” leading to massive data leaks of customer information and server maintenance that lasted weeks, which caused a service outage for users (The hacker group Anonymous denied any responsibility for hack/breach, nor were any of the members charged since then). Many games are only available to buy and download on the PS Store, such as Sony Japan Studio’s PS3 game Rain released in 2013. Sony announced that it will drop support for the consoles on their website under “Importance Notice ”and so after July 2nd, 2021, users will not be able to buy and download games on PSP, PS3, and PS Vita consoles from the PS Store. This renders many games that are only available on the PS Store inaccessible for users, as they will no longer be able to download and play them in the future. Additionally, due to the data of the games being stored on Sony’s servers, game archivists are not able to recover the game data all that easily. Therefore, people will no longer be able to experience the 2011 version of the PS Store, neither through the games and the outage the also shaped users experience at that time. Update (April 22nd, 2021): According to an April 19th, 2021 press release from Sony, the decision to drop support for the PS3 and PS Vita has been reversed. For the foreseeable future, users will be able to purchase games for those systems. However, PSP support is still set to end on July 2nd, 2021.

Language: The PS Store is available in multiple languages and which languages people could use in a region have changed over the years. Previously in 2011, the language of the store was tied to the region associated with you PSN Account. However, now there are some options to change the language and region.

Size: Sony’s servers host the data of thousands of games across their consoles. The image of PS Store from 2011 is 209 KB.