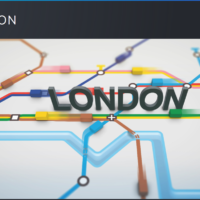 Public description: Henry Beck's original tube map with its first iteration in 1933 is perhaps one of the most iconic depictions of a transport system and have inspired many works ever since. The game Mini Metro, published by Dino Polo Club, is a game with aesthetics modeled after the tube map and published on PC on the platform Steam, owned by Valve Corp. As a derivative artwork featured as a digital trading card on Steam, it is interesting to note the similarities to the recent buzz of Non-fungible tokens (NFT) on blockchain. This image could be treated as one due to the ability to exhaust it as part of a set to earn badges on the Steam platform , but alternatively it could be argued as fungible as trading cards purchased or exchanged on Steam are identical to each other. The artwork itself, which follows Beck, is a highly simplified version of the Tube network that is further simplified here to show a map of the Tube as possible through the mechanics allowed by the game, therefore a further reduction from the map that we see.

Credit: The actual copyright of the Steam trading card belongs to Valve Corporation, the operator of the Steam gaming platform and thus operator of the trading card scheme as well. Credit though must be due to Dino Polo Club, as the developer of the game, who created the art style. Henry Beck could also be credited as a forerunner of sorts in pioneering this art style. The people who created the object depicted, the Tube should also be somewhat credited for created the obejct that the