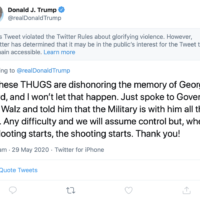 Size: The object is a tweet composed of 280 characters.