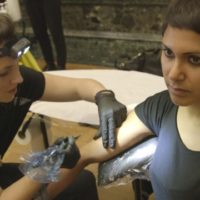 Public description: This is a video for online publication The Guardian that portrays an unsanctioned artistic/activist demonstration in London’s Tate Britain gallery. The piece was named Birthmark and performed by the group Liberate Tate. 35 artists tattooed each other with the parts per million of carbon dioxide in the atmosphere during the year of their birth to protest the Tate’s financial ties to the fossil fuel company BP. In so doing, these artists point to the importance of data representations of climate change not merely in political and scientific discussions but as embodied burdens and calls to action.

Materials used: This is an MP4 video file uploaded to an online publication, portraying the act of tattooing (ink to skin). The tattoos themselves are bodily mementos of the changing climate, using scientific data on atmospheric CO2. The materials listed in the artists’ statement for Birthmark are “skin, needles, ink, rotary machine, latex, plastic, bodies, trauma.”

Copyright: IP rights may apply since this is an artwork, but as a collective work (and a tattoo) this would likely be difficult to apply in practice. The video itself is c/o The Guardian, and copyright protections would apply, though the video is freely available and downloadable.

Size: The video file is 9.62 MB. The artwork itself draws on decades of climate change data, easily accessible but based on thousands of observations.