Where are the numbers? 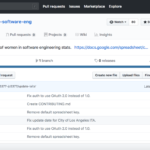 Public description: Silicon Valley software engineer Tracey Chou had worked for Pinterest, Quora, Facebook and Google. In 2013 she wrote a blog post titled "Where are the numbers?" calling for greater transparency and accountability around gender diversity in the industry. While at the time there was a general recognition that fewer women work as engineers compared to men, there was very little workforce diversity data available to back this up. Chou set up a GitHub repository inviting companies to contribute their stats on the gender balance amongst team software engineers. Almost 300 companies have since shared their data. In a move which used the tools of Silicon Valley to expose its weakness, Chou's action pre-empted the more recent public outrage that has exploded around the lack of diversity in the technology industry, and the bias that it creates across systems - from facial recognition software to criminal justice algorithms. The GitHub repository and google spreadsheet become symbols for an employee-led movement demanding transparency not obfuscation, diversity not bias, inclusion not closed doors, and community action in response to corporate control; all through the means of collective collection of data that focuses the spotlight back on the industry itself. As for the Museum of Data, collecting a collective collection of data is itself an act which begs questions. How does one collect something that lives, like a GitHub repository? How does the collector track or verify any verifications or changes contained in what is collected, as it evolves over time? How is GitHub repository represented as data-object? Does a hyperlink or screenshot suffice? And if we are to collect a repository in GitHub, does that mean that we also collect everything that it links to, from Medium blogposts to google spreadsheets? Whose permission must be sought, if it must be sought at all?