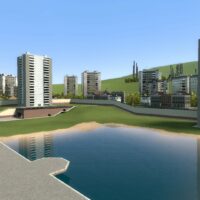 Public description: Gm_construct is one of the two maps shipped with the independent physics sandbox game Garry’s Mod when it was released in 2006. The version presented here is the 13th and final version of the map. The map is made for use on the Source Engine (thus allowing it to be played on other games using this engine), and features a large open field, a small lake and several tower blocks. Certain buildings are accessible, and feature several rooms for testing the engine’s functionality, such as a white and dark room (see additional images). As a map with open-ended sandbox play in mind, gm_construct is not designed with any specific gameplay in mind. The textures used are all taken from Valve’s title Half-Life 2, also created using the Source Engine. The object itself is used by players for a variety of games, and has itself become a reference point for Source Engine titles and has spawned numerous memes, investigative videos, as well as several series of horror-inspired videos that play off the eeriness of the map in solo play alongside late-2000s online video trends.

Credit: Garry Newman, developer of Garry's Mod and creator of the original gm_construct, is the 'true' author. However gm_construct has been modified, recreated and used in myriad ways that trying to ascribe singular ownership is difficult. A user who plays on the map could well be considered an owner, given that they own the file on their computer (assuming that the file is indeed located on their internal storage at that point and not hosted elsewhere), as the instance of gm_construct they are playing exists only on their computer at that time. Launching a multiplayer server on gm_construct invites additional questions. If the server host does not have the time to set up a dedicated server and uses a peer-to-peer server instead, does each player who joins also own the server, do they each author the object through participation, despite the host controlling the on/off switch so to speak? Even if a dedicated server were used, the map is not the private property of the server owner (except perhaps the particular instance of the map running on that particular server). There are several questions about where the object of gm_construct lies when considering credit; if we consider it like an object as in object-oriented, is it the template or the instantiated object in which the object lies? Is each instantiation of gm_construct a unique object behoving individual consideration, like a series of tools used for the same ends?

Language: Lua programming language used for scripts in Hammer Editor, unlikely to be encountered by users in-game. Aside from the English used in gm_construct (and the grammar of the map name; most Source Maps follow the convention of gamemode_mapname. in this case, gm is "Garry's Mod" and construct is the actual map name). Though there is no text on in gm_construct itself, localisations of Garry's Mod are: Bulgarian, Czech, Danish, German, Greek, English, Pirate English, Spanish, Estonian, Finnish, French, Hebrew, Croation, Hungarian, Italian, Japanese, Korean, Lithuanian, Dutch, Norwegian, Polish, Portuguese (inc. Brazillian Portuguese), Russian, Slovak, Swedish, Thai, Turkish, Ukrainian, Vietnamese, Chinese (Simplified and Traditional)

Size: Dimensions in game; not easy to measure. Perhaps around ~180 metres by ~280 metres if one considers ‘physical’ dimensions (~7000x~11000 'units' in the Hammer tool used for editing the map). As a file, about 35 MB, plus another 7.5 MB if the navigation files used for non-player character (NPC) pathfinding are included. The above map information from materials could also be factored in. Given that map size in the Source Engine is limited by things such as solids, faces, objects and so forth and not by 'physical' dimensions, this might be more apt. Additionally beyond the actual constraints of the map is the skybox; this is an area within the map (not normally accessible without the player unless they fly and disable collisions) that is used to generate distant terrain and a sky beyond the map to provide a backdrop. Though not routinely accessible it is still a part of the map, and it's unclear if it should be factored into the size as a result. See attached images for demonstration of skybox.