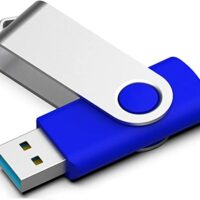 Public description: Why? I believe this object should be in the Museum of data because if it used to be essential, the Cloud is taking over as it stores information in a safer, more convenient way. The cloud is accessible from any medium, as long as you are connected to the Internet (smartphone, tablet, laptop, etc.). It is bound to fully replace physical storage media. What? Invented in the early 2000s, a USB flash drive is a removable storage medium where you can store all types of files: photos, videos, music, work files (pdf, text documents or spreadsheets) and any digital file. It is therefore not a fixed storage device such as a hard drive installed in a computer tower or a laptop hard drive. A USB flash drive is a mobile storage device that is connected to a computer via a USB port. USB stands for Universal Serial Bus.

Materials used: It is an insulating epoxy plate with printed electronic circuits on which the information flows in the form of electric current. This board is the link between all the components of the USB flash drive (connector, memory, controller, etc.)

Credit: Officially, it is the Israeli entrepreneur Dov Moran who is considered the main inventor of the USB flash drive. It was he who first had the idea, in 1998, of manufacturing a small removable memory that could be connected directly to the USB port on computers (the USB port itself having appeared a few years earlier, in 1996). In April 1999, Dov Moran filed a patent in the United States. This patent was officially awarded to him on 14 November 2000. His invention is called DiskOnKey and has a capacity of 8 megabytes. It is connected to a computer with a cable. Other inventors had the same idea at the same time. Authorship of the USB flash drive is thus disputed by other inventors. One year before the Israeli invention, in 1999, the American Shimon Shmueli, an engineer at IBM, also designed a small electronic memory that can be connected directly to computers. The difference is that there is no cable. But that's not all. A Malaysian, Pua Khein-Seng, also claims credit for this innovation. He developed the flash memory that will be used in USB sticks and which makes them more solid by replacing the mechanical elements. Finally, in July 2002, a patent was awarded in China to the company China Netac for a similar product. So there are several inventors of the USB flash drive. But never mind. In 2000, several equivalent products from different brands were released.

Size: In terms of memory, its size varies from a few GB to a few TB. In terms of physical size, it is usually 5-8 centimeters long, and less then a centimeter thick.