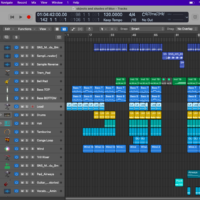 Public description: ‘objects and shades of blue’ is a song written by Max Roberts using Apple’s Digital Audio Workspace (DAW) software, Logic Pro X, and is comprised of a range of vocal, percussion and field recorded sampled sounds and digitally synthesized instruments. The samples used were obtained through Splice.com, a sounds sample library that provides royalty free files. Samples include loops – previously recorded rhythmic or melodic phrases that act as musical sentences – of tambourine, conga and men's choir, as well as one shots – a previously recorded sound that acts as a musical word – of kick drum, clap, rim, snap, and various hi-hat hits. A self-captured field recording of wind through trees was also used. The majority of melodic elements in this song are generated using digital synthesizers such as Logic Pro X (LPX) native synthesizers, Alchemy, Sculpture and Sampler. ‘Native’ in this case means that the digital equipment is included with the purchase of the DAW. Presets created by the synthesizer’s creators were used as base sounds and are manually tweaked to fit the intended auditory aesthetic. In addition to LPX native synthesizers, an open-source synthesizer called Vital was used. The sound generated by this synthesizer was designed by Max Roberts. All base sounds described above are then adjusted using both LPX native plug-ins and third-party plugins – these are plug-ins that are downloaded from outside the DAW – and parameter automation of the synthesizers and plug-ins. Plug-ins are programs used to manipulate sounds in a range of ways, including reverberations, delays, distortion, equalizers and compressors. The adjustment of plug-in and synthesizer parameters add new audio textures and qualities to the record to produce evolving sounds.

Materials used: ‘objects and shades of blue’ is comprised of prerecorded and digitally synthesized sounds through the Logic Pro X digital audio workspace software. In the production of the record these sounds were transmitted by PreSonus Eris studio monitors, Audio Technica studio headphones, and the built-in Apple MacBook Air speakers.

Credit: The version of ‘objects and shades of blue’ pictured here was written, recorded and mixed by Max Roberts. There is also a work in progress version that is being mixed by Andy Colburn, a sound engineer based in Minneapolis, Minnesota. The software used in the creation of this record was created by Apple Corporation, Soundtoys, Vital Audio and Valhalla. These are royalty free through open source software or the purchase of the software's license. Similarly, the samples used were self-recorded or were purchased from Splice.com, which provides royalty free samples.

Size: This record is 4:42 minutes long with 12 sampled sounds and 3 digital synthesizers generating 6 distinct sounds. The file in DAW is 84.4 MB and the printed MP3 is 5.6 MB.